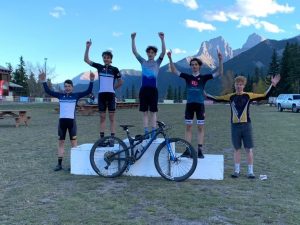 Racing in the final Canada Cup of the season, Ethan Vandenberg once again demonstrated that Manitoban athletes can compete with the best in the country on the mountain bike. Fifth spot in Sunday’s XCO in Canmore secured Ethan’s second Canada Cup podium this season!

Ethan demonstrated his resilience and racing prowess by delivering a solid performance on the final day of competition, fighting back through the field after an early crash saw him out of the podium spots. We’re super impressed with how he responded in the heat of the race!

Next season Ethan will be stepping up to the Junior category. No doubt he will be back again challenging for the top step of the podium on the Canada Cup circuit once again.