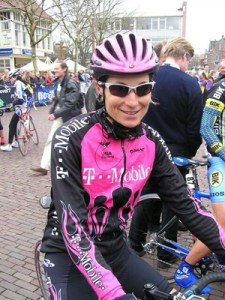 Two prominent international racing cyclists have recently accepted an invitation to become honorary members of the Portage Junkyard Dogs Cycling Club. They are Michael Barry, one of the most successful Canadian professional bicycle racers over the past decade, and his wife Dede Demet Barry who was the U.S.A. Road Champion on six occasions. Michael grew up in his father’s bicycle shop in Toronto surrounded by bicycles and cycle racing books and magazines from all over the world. From a very early age he knew that he wanted to be a bicycle road racer who would, when old enough compete at the highest level in one of the toughest sports in the world. Dede started her athletic career in Milwaukee as a junior member of the U.S. Speed Skating Team, riding a bicycle to keep fit in the summertime. Finding that she had a natural aptitude for bicycle racing she turned professional and went on to win two World championship medals, two World Cup races, one of which was the 2002 race in Montreal. She crowned her career in her final race, by winning the Silver Medal in the Time Trial at the Athens Olympic Games,
As a junior rider Michael competed in local road races and time trials during the season, and then in the fall he was on the starting line for the cyclo-cross races. He soon proved that he was a rider to be reckoned with often crossing the line in first place. In 1993 Michael was part of the Ontario team which competed successfully on the Winnipeg Velodrome for the National Championships. Later as he gained more experience he became a part of the Canadian National Team sponsored by Tim Hortons. Realizing that the next step was to move to Europe, where cycle racing is second only to soccer as the most popular sport; he joined the Annemasse Cycling Club in France.

In 1996 he said goodbye to his parents at Toronto airport, saying that they would either see him again by the end of the month, or the end of the year. He was wrong about that as he was chosen to ride the road race at the Atlanta Olympic Games, riding as a support rider for Steve Bauer, Canada’s best professional rider to date, and Michael’s hero at the time.  It was at these games that Clara Hughes won a bronze medal in the ladies race and introduced Michael to Dede, a member of the U.S.A. ladies team. The two would soon be married! 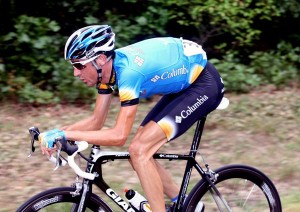 Michael turned professional in 1999 riding for the American Saturn team, where he rode in both North America and selected European races. His big break through came in 2001 when he was asked to join Lance Armstrong as a support rider, or domestique on the U.S. Postal team. The life of a domestique is a hard and often thankless task, he has to shelter the team leader from the wind in a long race, drop back to the following team car to pick up food and water for the rest of the team, and make sure that the designated team leader is in a position to win a race in the final kilometers. If the leader has a fall or mechanical trouble, then it is the domestique’s job to pace the leader back to the front of the race, or in some cases gives up his own bicycle for the leader. The lowly domestique then waits for the team mechanic to drive up with a replacement bicycle. Although a domestique does not often finish up with a high placing in the race, he contributes a tremendous amount of hard work to the team effort. A good domestique is a highly sought after team member. He must be an unselfish rider, dedicated to his team, and as tough as nails to carry out this arduous duty. Michael has been called a “Super Domestique” on several occasions.
When Michael is called upon to ride on an all Canadian team, at the Olympic Games or at the World Championships, one sees his real worth. He is often the team leader himself and his eighth place in the Beijing Olympic Games, and his seventh place in the 1993 World race in Hamilton, Ontario speak volumes for his ability as a world class rider. He has taken part in the Tour of Spain on several occasions, also the Tour of Italy. He was a member of the winning team in Italy in 2005, with the first place overall going to his team mate Paolo Savoldelli. Michael has won stages in both the Tour of Austria and the Tour of California. In 2008 while racing for Canada in the World Championships in Mendrisio, Switzerland, Michael was involved in a crash in the early stages of the race. At the finish line he was the best placed North American rider in eighteenth position. After the race he went to the local hospital to find that he had suffered two broken ribs in the earlier accident.

This year he is riding for the newly formed British Team Sky, and as one of the veteran riders his job is to give the younger riders the benefit of his long experience. The team has been riding well since early March, and now in April the really tough part of the season takes place. Michael has ridden both the Tour of Flanders, the Belgian classic race over an exhausting series of short but steep climbs, and the French classic Paris-Roubaix the toughest one day race in the world.

The Paris-Roubaix race takes place over narrow cobbled roads, little better than cart tracks through the beet fields and the old coalmining area of Northern France.  Michael finished a creditable twenty sixth out of one hundred and ninety three starters, and but for a flat tire in the closing stages of the race he would probably have finished in the top ten. Only seventy four riders reached Roubaix.  His Spanish team leader, Juan Antonio Fletcha was narrowly beaten into third place by Fabian Cancellara of Switzerland and Thor Hushovd of Norway. In May the Tour of Italy and in July the Tour de France are both waiting for the teams to be announced. Michael should be high on the list of candidates to ride.

Michael and Dede live in Girona, Spain, with their two young sons who will perhaps get bitten by the bicycle racing bug in the future! The Portage club is already talking about a trip to Europe to cheer on their new club members, and is also hoping that Michael and Dede will be able to visit Portage sometime after the racing season closes. We are indeed honoured to have two such champions to give their support and encouragement to the Portage Junkyard Dogs cycling club, and to serve as an example to the younger riders, that it is possible with hard work, dedication, and good luck to reach the top level of this tough sport.