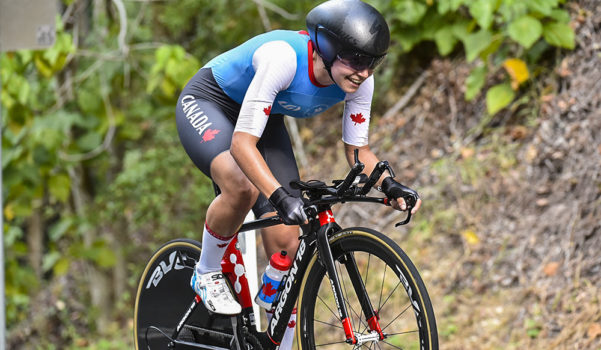 Gold Coast, Australia, April 10, 2018 – Cycling switched from the track to the road at the Commonwealth Games on Tuesday, with the individual time trial competition taking place at Currumbin Beach, south of Gold Coast.  Annie Foreman-Mackey was Canada’s top finisher, in seventh place in the women’s competition.

The main circuit was a single 25.5 kilometre loop, with two significant climbs; the first with a steep 10% grade. The women did this loop, while the men also tacked on an out-and-back section that took their race up to 38.5 kilometres.

Foreman-Mackey was the ninth rider to start out of 19 competitors, and her time of 38 minutes and 59.91 seconds put her in the Hot Seat as the leading rider when she finished. Foreman-Mackey stayed in the lead through four riders before she was knocked out of the top spot. In other Canadian results, Ariane Bonhomme was 13th and Steph Roorda was 14th. Katrin Garfoot of Australia took the gold medal, ahead of defending Games champion Linda Villumsen of New Zealand and Hayley Simmonds of England.

“I’m pretty happy with my ride,” said Foreman-Mackey. “It’s my first time trial of the year, and you have to see where you are at. I’m pleased with how I paced my ride; I was trying to ride controlled for the first 11 kilometres leading into the climb. We’ve been training for a shorter effort [in the 4000 metre Team Pursuit], so it felt a little long today, but I’m pleased with this as a starting point that I can build on during the season. We had some wind and some rain, and you just had to keep your head up and be ready for everything. It was amazing on every climb; they were lined with people and they somehow knew my name! On the final straight it was pretty amazing to hear the crowds. I even got to spend a little time in the Hot Seat, my first time doing that!”

In the men’s race, Jay Lamoureux was the top Canadian rider, finishing 14th out of 56 starters. Other Canadian results were Derek Gee in 18th and Adam Jamieson in 43rd.

“I think I was able to ride pretty consistently,” said Lamoureux. “I was going for riding a certain wattage [power output], and I executed quite nicely. I had better legs than I thought I would after the four days of track racing. I had no expectations on a placing, so I’m overjoyed with 14th.  The crowds were great, yelling ‘Go Canada’, and a lot of people were even yelling ‘Go Jay’, which was really cool.”