View it on CBC HERE

Two or three hours a day, at least five days a week, Rebecca Man and Chloe Penner are on their bikes, whisking down dirt trails and back up steep climbs to prepare for their first-ever Canada Summer Games.

The pair are only 16 and 17 years old respectively, placing them at the youngest end of their category, and are the only two members of Manitoba’s women’s mountain biking team this year.

They’ve been training since they were seven, squeezing in practice and workouts alongside school, other sports and summer jobs (Penner works two of them). 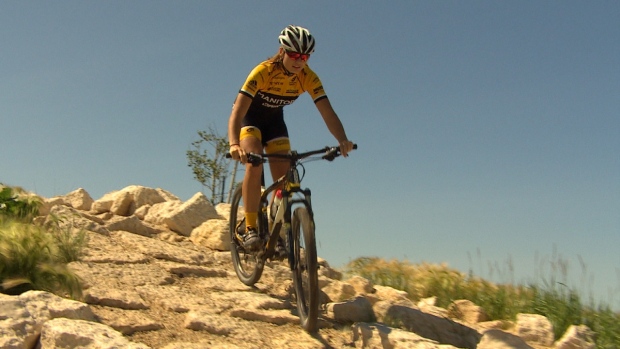 On July 30, they’ll hit the trails for the real deal, zooming along the six kilometres of dips and dives of the newly opened trails on the Bison Butte in Fort Whyte — trails designed by Man’s dad as a legacy project for the Games.

“The adrenaline of it all, it really gets your heart going and it’s just kind of exhilarating,” said Man, who will start Grade 12 at the University of Winnipeg Collegiate in September.

Held every two years, and alternating between summer and winter games, the Canada Games offer a competitive opportunity for young athletes. The Games celebrate their 50th anniversary this year.

The Games in Winnipeg are expected to bring 4,000 athletes and more than 20,000 visitors to the city.

Thrill of the competition

Both teens got their start as cyclists in the Kids of Mud program, a youth cycling group organized by the Manitoba Cycling Association. From there, they transitioned to the provincial development team and the provincial performance team.

A year ago, during the Manitoba Summer Games, Man said there were more than a dozen female mountain bikers in her age group. This year, there are only five, and she and Penner were the only ones to qualify for the Canada Summer Games.

They’re both competing in the road cycling events as well.

“It’s astonishing how many girls dropped out,” Man said. “When we went to the [2016] Manitoba Games together, there were probably, like, 15 of us for mountain biking, and now there’s two of us for the Canada Games.”

She’s looking forward to having more female competition in the event, she said.

“The thrill of the competition, because it is just fun and friendly spirit and stuff,” she said. “It’s a good time.”

It can be tricky to find somewhere to practice mountain biking in Manitoba, Man admitted. Within city limits, their best option is Bison Butte itself. The hill was built using dirt dug out for the construction of the nearby Ikea store.

“Team B.C., Alberta, they really have an upper hand on the Prairie provinces,” Man said with a laugh.

But both she and Penner said the sport is growing overall.

“It really didn’t used to be big. It’s gotten a lot bigger in the past few years, though, and that’s kind of exciting,” Man said.

“It’s a growing sport. You should all come try it,” she said.

In the lead-up to their events, both teens say they listen to music to get psyched up — country for Penner, indie pop like Twenty One Pilots for Man.

You can catch the mountain biking cross-country race at noon on July 30, followed by relays on Aug. 1 and Aug. 3.