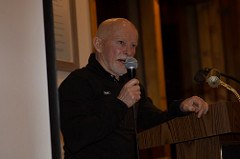 The MCA Lifetime Achievement Award recognizes a member of the Manitoba cycling community who has made significant contribution to cycling in Manitoba as an athlete, coach or builder over a minimum of a ten year period.

Please submit nominations in writing to the MCA office. Please include a history of the candidate’s involvement in cycling, and the value this contribution has made.