Three Manitobans to Participate in the 2012 World Road Championships in Limburg, Holland

The Manitoba Cycling Association (MCA) is extremely pleased to announce that three Manitobans will be participating at the 2012 World Road Championships in Limburg, Holland from September 15 – 23.

Leah Kirchmann and Chris Prendergast, both members of the Manitoba Provincial Cycling Team, will represent Canada in the Elite Women and Junior Men road races.

Both Leah and Chris are true “made in Manitoba athletes” who have progressed along the Long Term Athlete Development model towards increasingly competitive successes.

Leah Kirchmann rides for the Optum Pro Cycling Team, presented by Kelly Benefit Strategies, and is a member of the Canadian National cycling team.  At the age of 22, Leah has many accomplishments to be proud of including winning the 2011 National Criterium Championships.  Leah has had an amazing season, starting with a silver medal at the Pan American Championships road race in Mar del  Plata, Argentina.

Leah has just competed in the Tour Cycliste Féminin de l’Ardèche in Ardèche, France with the National Team where she finished 9th overall and won the Best Young Rider jersey.  She will be competing in the Elite Women’s road race of 145km on Friday, September 21, 2012 at 14:30pm (7:30am Manitoba Time).

Chris Prendergast is the 2012 Junior Men’s National Road Race Champion.  He has had an amazing season racing in France.  At the age of 18, Chris left Winnipeg early in this spring to ride for Velo Club Course Morteau Montbenoit, in France.  In his first race of the season he rode with the senior team at the Route du Comte Petite a St. Antoine where he finished fifth overall (and as the first junior).  Last year Chris won the 2011 National Criterium Championships.

Chris’ success reflects his dedication and determination to succeed in cycling.  Chris has continually had outstanding success throughout his 2012 season, and this will be his first time at the World Road Championships.  He will be competing in the Junior Men’s road race of 129km on Sunday, September 23, 2012 at 9:00am (2:00am Manitoba Time)

Jayson Gillespie has been the MCA’s Provincial Head Coach since 2008.  He represented Canada as a National Team Coach at the 2008 and 2011 World Road Championships, and at the 2010 Youth Olympic Games.  Jayson is currently working with the Junior National World Team at a preparation camp in Tielt-Winge, Belgium, where the national teams is preparing for optimal performance in Limburg, Holland.

For more information, please contact the MCA at 925-5686 and see the following websites: 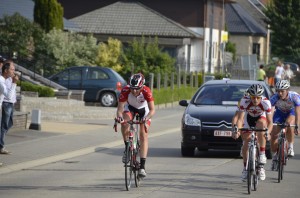 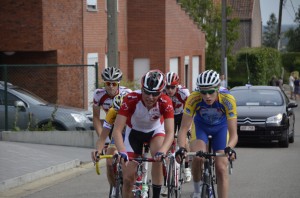