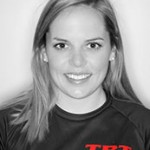 Manitoba may not have “world class” mountains, but this doesn’t mean we don’t have Mountain bikers representing National teams! As a Provincial Sport Association, MCA’s task is to get our Provincial athletes onto the National (& International) stage and Karlee Gendron is another success story we are proud of.

Karlee recently returned to Winnipeg for the holidays from California. Her other home is Ontario where she now lives and races for the “Trek Red Truck Racing” team.

After a tough season recovering from a concussion Karlee is ready to tackle the 2016 season where she will again represent Trek Red Truck Racing. Karlee was originally part of Trek Red Truck’s road team back in 2011, before making the switch to Mountain biking. She also has put extensive time in with speedskating (over 10 years). Prior to Trek Red Truck Mountain team, she raced for the Trek Canada Mountain Bike Team.

About Trek Red Truck Racing One of Canada’s longest running teams, now entering its’ 22nd season, Trek Red Truck Team is committed to developing young cyclists to reach their fullest potential both on and off the bike. Through sponsors and a network of friends, TRT provides an environment of support, including scholarship opportunities, for young athletes so they can compete at the highest level and still maintain their educational pursuits. For more information visit: www.trekredtruckracing.com Twitter: @TrekRedTruck Instagram:@trekredtruckracing

Karlee pictured here with her Dad (Bill Gendron) at the Canada Summer Games in Sherbrooke in 2013. Karlee was the Bronze medallist in MTB-Cross country and achieved a silver medal along with teammate Anna Schappert in the relay race.