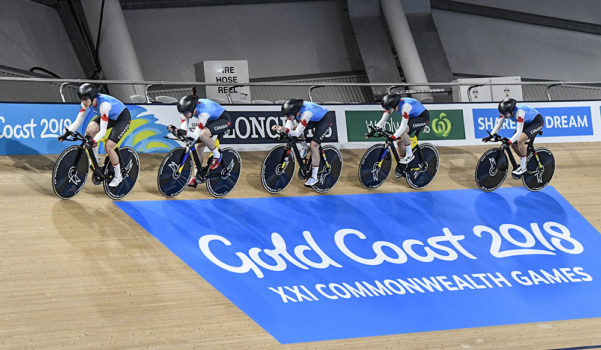 The track competition will run over four days, from April 5th to 8th, with a total of 16 medal events to be contested. Canada will have riders in every event, with strong medal potential in a number of them, beginning with the Women’s Team Pursuit on Thursday.

Canada has won bronze in the past two Olympic Games in this event, plus multiple world championship and World Cup medals. The women’s team will be anchored by Calgary’s Allison Beveridge, a member of the 2016 Rio bronze medal team. Beveridge, the reigning national road champion, will also compete in the road events later in the Games.

“The track is the focus for now, and then we’ll have some time to look at the road,” said Beveridge. “It’s a super nice track, super smooth; yesterday was our first day training there, but it went pretty well, although it’s really hot, for sure, which will be a factor.”

“New Zealand and Australia will be really strong, but I think Wales and England will also have pretty decent team pursuit squads. Wales has some previous team pursuiters who had gone to the road, but have come back for this event, so they have a pretty strong program for the Games. England has their development team here, mixed in with some of their Elite team, including some current world champions. I think it is going to be a pretty good battle; the Aussies are obviously peaking for this, so it’s going to be a fight, and with only two rounds, you have to get that first ride right.”

Other opening night events include the Men’s Team Pursuit and the Team Sprint for both men and women. Canada’s men had a breakthrough ride at the recent world championships in the Team Pursuit, finishing eighth – the highest ever for the Canadian men’s team.

Vancouver’s Aidan Caves, who is the sole member of the 2014 Glasgow Commonwealth Games team pursuit squad to be at these Games, says the track is perfect for their event.

“It’s a really nice facility. We had no issues riding here and finding our line, and it seems pretty fast. We find it better for riding team pursuit on than some other tracks, like Glasgow [2014 Commonwealth Games], which was built more for sprinting. This has wider corners and is easier to do exchanges on.”

“There’s been a lot of new faces come to our team [since Glasgow]. That was basically the first major race the Canadian men’s team pursuit ever did. Since then, a couple of people have retired and we have filled the gaps with people like Adam Jamieson and Derek Gee, and last year Michael Foley stepped in. I guess I’ve just been the constant in the group.”

“It’s been pretty awesome to see it evolve and we’ve dropped about 14 seconds off what we did last time. We came fourth in Glasgow so we are definitely looking for a podium here. Obviously we have New Zealand, England and Australia here, but we are hoping to give them a run.”

In the Team Sprint, Australia and New Zealand are the current favorites. For the men’s squad, Canada is bringing just one sprint rider from the previous 2014 team, Rio Olympian Hugo Barrette of Iles de la Madeleine, Quebec. Barrette will be joined by former Junior world kilo champion Stefan Ritter and newcomer Patrice St-Louis Pivin. The team will be hoping to make it to the medal round.

The women’s sprint team is made up of Amelia Walsh of Ayr, Ontario, and Lauriane Genest of Levis, Quebec. This will be the first Commonwealth Games experience for both of these riders, and their first as a team competing at the international level.

Once the team events have been completed on the opening day, the focus will switch to individual events over the remaining three days of track competition. A total of 12 medal events – six each for men and women – will be contested, with the Individual Pursuit, Scratch Race and Points Race for the endurance riders, and the Sprint, Keirin and Time Trial for the sprint riders.

Barrette will be a strong contender for a medal in both the Sprint and Keirin, as will Stefan Ritter of Edmonton in the men’s 1000 metre time trial. Canada also has medal potential in the women’s endurance events, with Annie Foreman-Mackey of Kingston, Ontario, a former world championship medalist in the Individual Pursuit. Beveridge and Steph Roorda of Vancouver will also contend in the women’s Points and Scratch races.